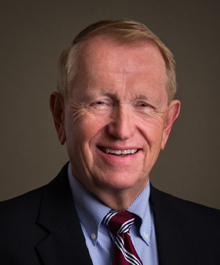 Jim has been in real estate since 1971 and has held the GRI and CRS professional designations. He is a 1966 alumnus of the Marquette University School of Business, where he was recognized in 2006 as its Entrepreneur of the Year.

Mr. Imhoff served as the 1990-91 President of the Wisconsin Realtors Association. In 1993 he was honored as Wisconsin's Realtor of the Year. At the national level Jim has served as a Director of the National Association of Realtors and as a member of the Realtor Political Action Committee (RPAC) for over 20 years where he served as Chairman in 2001.

In 1994. Mr. Imhoff was appointed to the Real Estate Board of the Wisconsin Department of Regulation and Licensing by Governor Tommy Thompson. In 1995 Jim was elected Chairman, where he served until August of 2002.

He also serves as a Director on the University of Wisconsin School of Business, Center for Urban Land Economic Research; and on the Advisory Board of the Real Estate Center at Marquette University.

Community activity is also on his agenda as he serves on the Board of the Great Madison Chamber of Commerce, and has served on the Board of Edgewood High School including serving as Chairman for 3 years.

Early in his career he held the SRA designation of the Society of Real Estate Appraisers and served as President of the local Chapter of the Society. He also was an examiner for the Federal Deposit Insurance Corporation (FDIC), an elected Member of the Deerfield Village Board, and served for 6 years in the Wisconsin National Guard with the 13th Evacuation Hospital Unit.